Evolution Gaming is one of the top software providers for online live dealer casino games. The company was founded in 2006, a decade after the first online casinos opened their virtual doors. It was one of the first business to business live casino services available in Europe.

Evolution aims to provide online casinos with top casino games and software that will give their customers a top casino experience each time they play an Evolution casino game. The company has definitely achieved this objective, as it’s one of the software providers to look out for when selecting a casino with which to wager.

Use our lists below to play free slot games from Evolution and easily find all the online casinos offering Evolution slot games.

In this article, we’ll also cover the history of the company, their best games, and the variety of Evolution games. We’ll also answer some of your Evolution Gaming questions in the FAQ section at the bottom of this page. 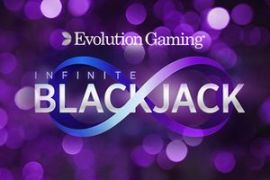 Evolution was founded in 2006 in Riga, Latvia, where the first Evolution Casino studio was built. The company created a revolution in online live dealer gaming with its quality games. Over the course of the next four years, Evolution signed agreements with giants William Hill, Gala Coral, 888Casino, Unibet, Bet-at-Home, Ladbrokes, and many more.

In 2010, they won their first awards — EGR Live Casino Software Supplier of the Year and EGR Software Rising Star of the Year. During the course of these few years, the company also expanded its headquarters to 2000+ m2, adding dedicated tables and environments.

In the years following 2010 the company was listed on the stock exchange, has continued to win awards — most recently the Online Casino Supplier of the Year at the Global Gaming Awards, and expanded its premises further, becoming the household name they are today.

Here are all the online establishments offering Evolution Gaming casino games in the UK:

Evolution games don’t specialize in your typical online slot games. As a company that revolutionized the online European casino industry with its live dealer games, Evolution is also bringing you something revolutionary in the slot genre — the first live slot game.

A Mermaid’s Fortune is the first of its kind and came out in 2010. Since then, Evolution hasn’t come out with any other live slot games or traditional slot games. Perhaps this is something they’ll look into in the future.

Slot games make up the majority of the market share of casinos, but Evolution got its name by creating online live casino games for the European market. Their live dealer games are some of the best, so be sure to try them out.

What are the awards Evolution Gaming has won this year (2021)?

For which countries does Evolution hold licences?

As such, Evolution is able to operate in many territories, including the UK, Europe, the USA, South Africa, and BC, Canada.

For which slot games is Evolution famous?

A Mermaid’s Fortune is Evolution’s most famous slot game; this game is the first of its kind — a live slot game that hosts a real-live mermaid to spin the wheel in the bonus round. A new mermaid spins the bonus wheel every hour.

For which other unique live dealer games is Evolution famous?

Its first lottery-themed game Mega Ball, its 24/ game show Deal Or No Deal Live, its two-card Football Studio game, and its ‘80s Las Vegas-style poker room Side Bet City game are just a few of the Evolution studios famous games.