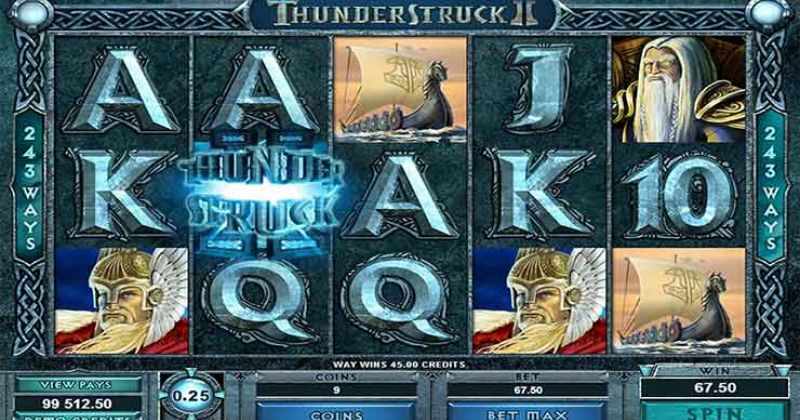 Where To Play Thunderstruck II 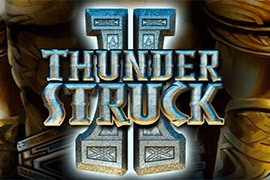 This video slot was released in 2010 and features five reels and 243 different ways to win. Made after the success of Micrograming’s original Viking slot ‘Thunderstruck,’ this slot has been popular amongst online casino players for a decade. Rated as a medium variance slot with a high return-to-player (RTP) percentage of 96.65%, this game is known for high winnings.

The incredible bonus feature, named the ‘The Great Hall of Spins’, is what makes these high winnings possible. What’s more, the wide range of betting limits means that these winnings are up for grabs by anyone.

The lines per bet begin at 0.01 and go up to 0.25. There are ten different coin levels to choose from, and the maximum bet will cost you 75 credits.

Perhaps what makes this game so popular is its retro design features that still captivate players today. The graphics and soundtrack fully immerse the player into the world of Nordic mythology.

This slot is packed with Viking themes and Norse mythology symbols, including Gods such as Loki, Valkyrie, Odin and Thor. Lightning and other dark elements bring the theme together to give a fully immersive experience for players.

The soundtrack of the slot is epic and almost dream-like. It perfectly reflects the images of the different Nordic Gods. You’ll even hear crackles of thunder and other sound effects as the game continues.

Thunderstruck II mobile is available on mobile devices such as smartphones and tablets. You can access this fantastic slot on any casino that supports Microgaming software that uses a compatible web browser.

Thunderstruck II has so many different bonus rounds to keep any player entertained. Its bonus features are what it’s most famous for, and what makes it stand apart from other online slot games on the market.

There are multiple Free Spins as well as a Bonus Round for you to rack up winnings. These include the Wildstorm feature, as well as the different levels in the Great Hall of Spins, which is triggered by three or more of Thor’s Hammer.

Wildstorms appear out of nowhere during any time of gameplay. Thor will appear and turn five reels into Wild reels for one complete spin, meaning even more winnings for that round.

This Free Spins level is activated between your first and fourth times landing on three or more of Thor’s Hammer. Valkyrie will give you ten free spins, each having a 5x multiplier. You can even activate more free spins during this feature.

Loki is summoned between your fifth and ninth times accessing the Great Hall of Spins. It features fifteen free spins and a Wild Magic feature. This feature will turn additional symbols into Wilds for even more winning combinations.

You will visit Odin on the occasion of your tenth to fourteenth times visiting the Great Hall. Odin will give you twenty free spins. Another feature within this bonus is Odin’s Ravens, which are Wild symbols that can turn random symbols into both 2x and 3x multipliers. If you’re lucky enough to land both of the God’s Ravens, you will be awarded a 6x multiplier.

Activated upon your fifteenth time visiting the Great Hall of Spins, Thor will give you the highest rewards out of any of the other gods. He will provide you with 25 free spins and a Rolling Reels feature. The Rolling Reels consist of consecutive wins as well as a multiplier of up to 5x.

Once you have unlocked every level of the Great Hall of Spins and visited every God, you will be able to choose which God to visit upon activating the feature.

There is no progressive jackpot in this slot. However, there is an in-game jackpot of 6,000 coins up for grabs.

Upon playing this captivating slot from Microgaming, you will notice all of its hits surely outweigh the misses.

If you’re looking for multiple opportunities to win on an online slot, try out Thunderstruck II for yourself. This slot from Microgaming is full of stunning graphics from Norse mythology as well as an epic soundtrack. There are even multiple levels in the Great Hall of Spins and a Free Spins feature with four different Gods handing out bonuses.

You can enjoy this game and all it has to offer on your desktop or mobile device. Try it today.

Does Thunderstruck II have Free Spins?

Yes, there are four different levels of Free Spins in the Great Hall of Spins.

Where can I play Thunderstruck II online?

You can play at any casino that supports Microgaming software on your desktop or mobile device.

What is the RTP of Microgaming’s Thunderstruck II?