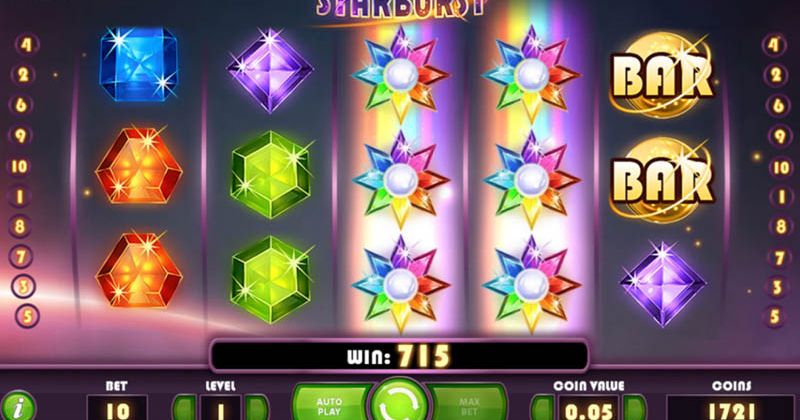 Where to play Starburst Slot Online

Set in outer space, the Starburst from Netent slot game comprises 3 rows across, 5 reels down, and 10 paylines. These paylines feature payouts both from left to right and right to left. Therefore, you can get winning combinations with 3, 4, or 5 matching symbols on reels alongside one another, beginning from reel 1 or reel 5.

There are 44 bet options available, starting at 10p and going up as high as £100 per spin. An autoplay option with 9 different numbers of auto spins to choose from is also available.

We will briefly discuss what symbols appear on this machine before getting to its other features.

Game symbols are five differently colored sparkling gems, a seven in a sphere, a BAR in a sphere, and, finally, a Starburst wild symbol which may only appear on reels 2, 3, and 4.

When appearing on 1 (or more) of the 3 middle reels, the wild symbol will replicate itself on the remaining 2 lines – in the same reel down. It will serve as a 'joker' for any symbol/s needed to make a winning payline.

The Starburst wild is the only wild symbol in the game – there are no scatters.

Besides replicating itself on the lines above and below, getting a Starburst wild symbol will prompt the game into 1 free spin with the 'wild' reel held static. The result here is the possibility of 2 multiple wins (the first win perhaps being on the spin that produced the wild, and the second on the free spin generated after that).

Your best-case scenario would be a Starburst wild symbol on reels 2, 3, and 4, which would generate a free spin for each. Then filling reels 1 and 5 with the highest paying BARS would put you in the 'pound seats.'

While this slot should appeal to an extensive range of players, it won't appeal to everyone.
Here’s a summary of this game's hits and misses.

Overall, Starburst is a good game for low-stakes players. One can play it on desktop, mobile and tablet devices, so it’s suitable for while you’re on the go.

What are the Most Valuable Symbols in Starburst?

Besides the Starburst wild, the most valuable symbol is BAR, followed by 7.

What are the Most Valuable Symbols in Starburst?

Besides the Starburst wild, the most valuable symbol is BAR, followed by 7.

What is the Return to Player (RTP) rate of Starburst?