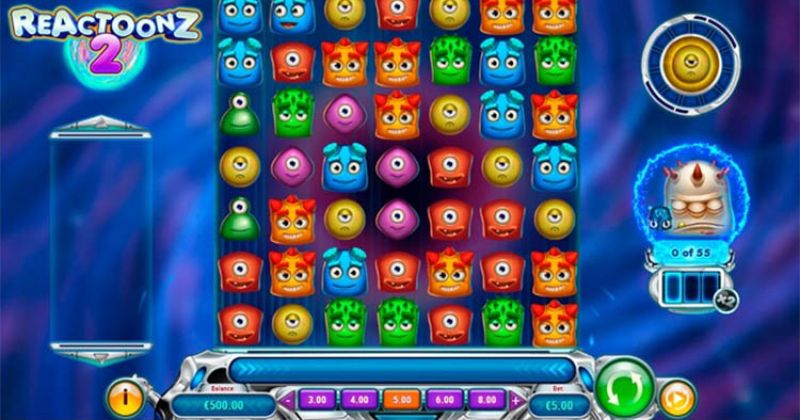 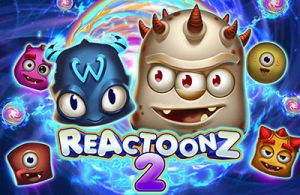 Reactoonz 2 is a sequel to the popular game released in 2017. This 7x7 video slot game maintains the original galactic theme. The background is a dark blue and purple vortex; colourful, friendly-faced alien creatures represent symbols and upbeat musical soundtracks.

Other specifications include 8 paylines, an RTP rate of 96.2%, and the maximum possible win of 5,083x. Betting starts from 0.20 to 100 coins per game. You can choose when and where to play. It’s supported by all platforms, including smartphones and tablets.

Alien creatures, called Reactoonz, represent eight symbols. These are further divided into two groups: the first consisting of four small, lower value, one-eyed aliens, and the second composed of four bigger, higher value, two-eyed aliens. The character with the highest value is the two-eyed pink alien. If you’re lucky enough to hit at least 15 of the pink Reactoonz, you will win 1,000x instantly.

Additionally, three wild symbols can replace any of the other eight characters, either vertically or horizontally, and trigger more significant cascades. The first, a returning favourite, is a brown three-eyed alien named Gargantoon. The last two are updates called the Electric Wild and Energoon Wild.

While a bonus round and free spins are not explicitly provided, this version’s bonus features make up for it.

There are four updated bonuses. The Fluctometer displays a one-eyed alien during a round. If you get a winning cluster with that alien, an Electric wild is generated. Electric Wilds charge the Quantumeter. The Quantumeter has four levels, and each has special bonuses that can be unlocked by filling the meter.

Here are a few aspects we think are perfect and a few that could be improved:

Our concluding thoughts regarding Reactoonz 2 are highly positive. Despite the lack of jackpots and free spins, the cascading reels packed with extra bonuses are enough to keep us coming back. The game can be a little confusing to new players; however, the available free demo is advantageous. The highlight has to be the fantastic graphics that captivate the players.

What is the Most Valuable Symbol?

The most valuable symbol is the pink, two-eyed symbol. Collecting 15 or more of this symbol is worth at least 1,000x.

What is the Return to Player (RTP) rate?

Can I Earn Cash Prizes?

Yes, cash prizes can be won. The paytable is available on the bottom left of the game by clicking the ‘I’ button.

Does the Reactoonz 2 slot have a jackpot?

Unfortunately, there are no jackpots available.