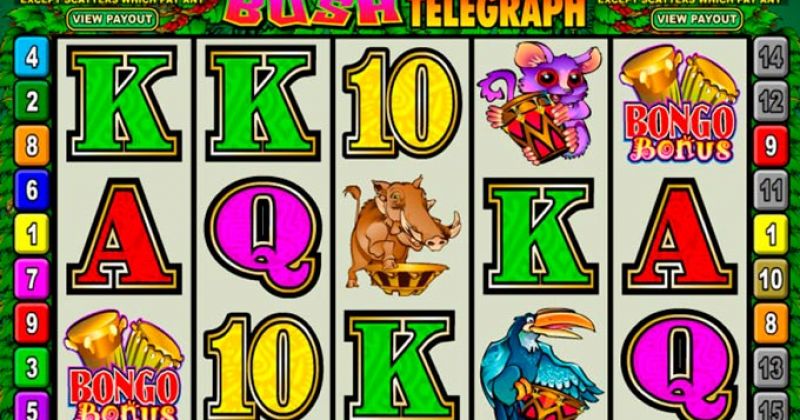 Where to play Bush Telegraph

While you play this game, you spin the machine to unlock profitable combinations. Bush Telegraph is a 5-reel slot with 15 paylines and a low to medium volatility.

Considering how new slots have a large number of paylines, this doesn’t really stand out among them. However, it has a very decent return to player (RTP): 96.56%. It’s well within the line of a good slot, which should have an RTP of over 95%.

You can decide on how many paylines you want to set up, pick coin size from 0.01 to 1, and can determine how many of them you want to spend, going from one to five.

Overall, this slot works in a very traditional way. There’s no crazy number of paylines, but you get special symbols that can boost your combinations.

Playing this slot is very easy because it works in a similar way to most of the other games in the market right now. You just need to set up how much you want to spend and then click on the spin button. If you score a sequence of at least three and up to five symbols from left to right in any payline, you’ve won.

The game has African jungle themes. The background features the Savannah, and there are typical animals from there in the game.

Visuals are very cartoonish and simple. However, don’t mistake that for ugly or low-effort. The drawings are pretty good, despite their simplicity.

Overall, the sound experience of Bush Telegraph is quite standard for simple slots. You can hear sounds that may remind you of a jungle in the background. It’s also possible to listen to a sound whenever a scatter symbol appears on the screen.

This slot is fully compatible with mobile devices, like any other slot created by Microgaming. The company knows the importance of offering games that can be played anywhere.

One of the best ways to play this game is via a casino. So, you may want to download a casino app for greater comfort. If you want, you can also play it on a browser-based operator.

Fortunately, this game has several features that most players will enjoy. You can participate in a minigame, get free spins, and multipliers from playing it.

Apart from its standard symbols (which consist of letters and animals), Bush Telegraph has many others. Some of them are special symbols that grant bonuses to players when they appear.

The most prominent of them is the wild symbol, which replaces any of other symbols in a combination and which comes with a nice 2x multiplier. If you get five of them in a payline, you hit the jackpot and win a major prize.

There are two scatter symbols in the game, too. One of them gives you ten free spins with a 3x multiplier, while the other is the drum bonus symbol.

If you get at least three of the scatter symbols, then you will get spins. Three unlock ten free spins with a 3x multiplier. If you get more of them, however, you can get even more free spins.

The bonus round is unlocked when you get three to five bonus drum symbols. This starts a minigame in which you need to pick drums, and each one will give a number of credits. You can get the same number of drums as the ones that appeared on your slot right before the bonus stage starts.

The jackpot of this game is enabled when you get a combination of five wild bush symbols at the same payline. When you hit the jackpot, you can expect to win 7,500 times the amount of coins that you wagered.

Bush Telegraph is a fine video slot. While someone could argue that it’s very normal and not necessarily remarkable, it works very well. It has a high RTP and a nice payout. So, you know that you will possibly win a big prize if you play for long enough.

This is a great slot for people starting to play. It’s not overcomplicated and is very straightforward. So, if you’re a beginner, you may like what Microgaming has to offer with this product.

Does Bush Telegraph have a jackpot?

Yes, it does. You can hit the jackpot when you get five wild symbols in a payline. It’s the highest prize that you can score in this game. Unfortunately, the game doesn’t have any kind of progressive jackpot.

Is it easy to gain money in this slot?

There’s no specific answer for this because slots depend a lot on luck. There’s no strategy to gain money from them, as you could have with blackjack, for example. The RTP of the slot is almost 96%, so this is a good potential option.

What kind of slot is Bush Telegraph?

It’s a video slot. It doesn’t have any defining features, but you can get most of the common perks, such as free spins or multipliers, if you play it.