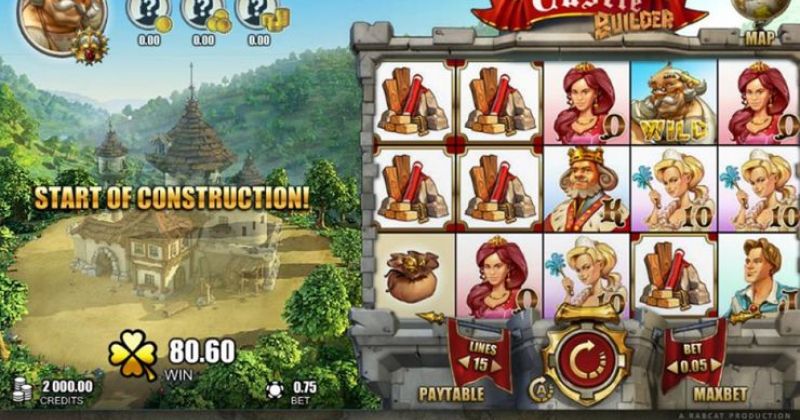 Where to Play Castle Builder

Rabcat Gaming’s Castle Builder is an innovative, 5 reel, 15 payline game available on desktop and mobile devices. It was released in 2014 and has an engaging emphasis on building castles and a heavy fantasy theme. This game is fast-paced, providing gameplay that has a low variance and an RTP of 96.47%.

Even though this game doesn’t have a jackpot or a free spin feature, you can still win big. Castle Builder has a bonus round that gives cash prizes that increase depending on the building materials used. This is a great game that provides an enjoyable gaming experience.

This game has nine symbols in total. Four of them are low-value and don’t have a unique feature; they are the 10, Jack, Queen, and King. The other five include the wild and the four high-value icons. They’re the building symbols and are the most important because the goal is to construct castles.

The wild symbol called the Builder can substitute for other icons except for the building symbols. It can appear on all five reels and lead to bigger wins. The four high-value images are the Money Pouch, Red Chest, Golden Chest, and Locked Gate. To build castles, you’ll need to collect these symbols; the more you collect, the higher the payout.

Rabcat hasn’t included a free spin round into this game. So, for bigger prizes, players must rely on the bonus game called the Castle Construction round. As you play the game and construct castles, building materials will appear randomly, which will add bricks to it.

After the construction is complete, you’ll have to choose a suitor for the King’s daughter. Each one has its own cash prize that you’ll win if the Princess is married off. You’ll unlock this bonus every time you finish building a castle for a larger prize.

Rabcat created an excellent game that allows you to build castles in three different worlds. It’s a fun game, but there are some drawbacks. Here’s where Castle Builder hits and misses:

Castle Builder is a fantastic, engaging game with a bonus feature that can be easily repeated. This game is inspired by fairytales while offering players a great experience with its fantastic audio and graphics. Even though there isn’t a jackpot, there are still several opportunities to win as you go up a level.

What is Castle Builder’s RTP?

Castle Builder has low variance and an RTP rate of 96.47%, so that you won’t win large prizes frequently.

Can I Earn Real Cash Prizes in Castle Builder?

If you sign up to an online casino and deposit money, you’ll have the chance to win cash prizes. However, if you don’t want to play for cash, several casinos will allow you to play for free.

Does the Castle Builder Have a Jackpot?

No, there isn’t a jackpot in this game. But, if you get lucky and get several high-value symbols, you can win a large prize.