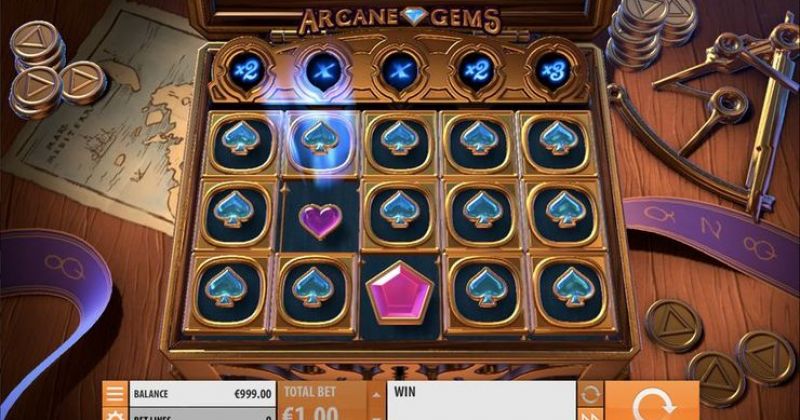 Where to Play Arcane Gems

Quickspin released Arcane Gems in 2020 with compatibility for both mobile and desktop devices. It has 9 paylines on its 3 by 5 reels filled with gem symbols of different shapes and colours. Unfortunately, it doesn’t have a jackpot feature like other slots. But it does have a high maximum payout of 5,625 times your wager.

This game also provides players with an excellent RTP of 96.05% and medium volatility. Quickspin has developed another great game that immerses players through amazing graphics and audio. The game is set in a treasure box with 3D graphics every time you win.

This game has 5 symbols depicting gems in various colours: Green, Yellow, Red, Pink, and Blue. What many players may find disappointing is the lack of a wild and scatter symbol. In Arcane Gems, you’ll need to collect blue gems to try and get to the multiplier and respin rounds. These features give you a chance to get a higher payout.

There isn’t a free spins round in this game. However, there are two bonus features you can look forward to playing. These rounds work together to increase your wins; they are the Arcane Lock Mechanics and Arcane Multipliers.

When players match at least three matching gems appear on the reels, they can multiply their wins. These symbols get locked in place while the other reels spin until no more winning icons appear.

When all reels are full, the multiplier at the top of the reels will increase. However, each reel has its own multiplier and doesn’t combine with the other reels. So, for example, one reel can have a three times multiplier while another has a five times multiplier. So your winning combination will be multiplied by three and then 5 instead of 15.

Quickspin developed a fun game with a lot of winning potential for players, but Arcane Gems has some drawbacks. The game hits and misses in the following areas:

Arcane Gems is a good game with amazing graphics and audio. Even though it doesn’t have a free spin bonus round, this game can be lucrative. It has a maximum payout of 5,625 times your stake. Overall, this is a fun game that’s compatible with several types of players.

Can I Play This Game for Free?

Yes, you can play Arcane Gems for free at many online casinos. However, if you want to win real cash, you’ll need to make a deposit.

What is Arcane Gems’ RTP?

This game’s RTP is 96.05%, but it has a medium variance. This means you can win small prizes often and larger ones less frequently.

Does Arcane Gems have a jackpot?

No, this game doesn’t have a jackpot. However, the maximum amount you can win is 5,625 times your wager.