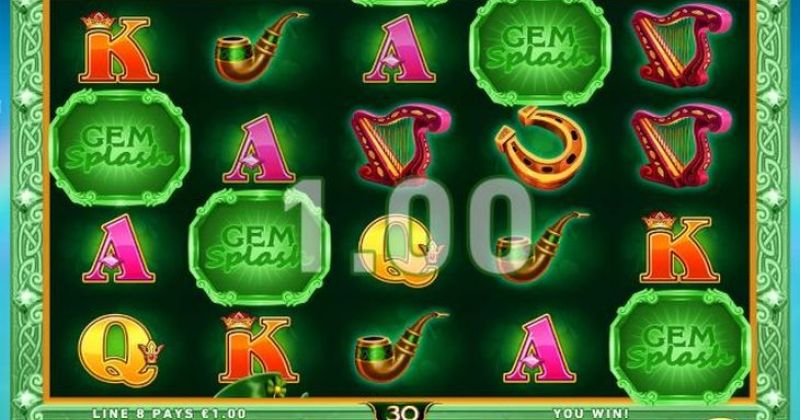 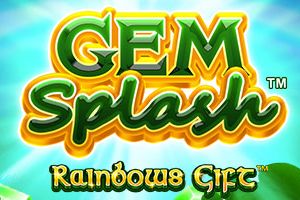 Released September 2020, Rainbows Gift is the second slot released by PlayTech with the name Gem Splash featured in the title. The online and mobile slot has an Irish theme, with 5 reels, 30 paylines, and a unique Free Spins feature. Rainbows Gift has the usual Irish symbols and progressive jackpots.

The slot has medium to high volatility, a generous RTP of 96.46%, and it’s playable between £0.01 and £500. Rainbows Gift has various bonus features that include bonus symbols, Free Spins, a Scatter, and jackpots. So you can laugh your way to fantastic wins with the slot’s friendly leprechaun.

Rainbows Gift has different-coloured gem symbols and occasionally work in conjunction with one another. The Green Gem Splash symbol appears randomly on the reel and has no value of its own, but pays out when a Purple Gem Drop symbol lands on top of it. Gem Drop Symbols also appear during spins and contain multiplier values from 1x and 100x of the wager.

The gold pot icon functions as the Scatter symbol and 3, 4, or 5 Scatter symbols activate the Free Spins feature. When this occurs you’ll get 8 spins to begin with. The number of rows and paylines expands after every second spin, so by the end of the round, you’ll have 7 rows of symbols crossed with 50 lines.

Above the reels Rainbows Gift has 3 progressive jackpots; Minor, Major, and Grand. They also appear randomly, meaning any spin could trigger it. Once the Jackpot Feature is activated, a large gem will materialise to reveal a jackpot or a cash prize between 10x and 100x of your wager. Consider that the higher your bet is, the higher your chances are of activating the Jackpot Feature.

Rainbow Gift might not encourage veteran players content with the classic pokies. But the game has a few qualities that make it appealing to those looking for a change in slot scenery.

Although Rainbows Gift doesn’t offer much besides the Free Spins and Jackpot features, it has some redeemable aspects. The charming 3D graphics are complete with the Irish leprechaun bringing you his pot-o-gold Scatter. The action is non-stop. 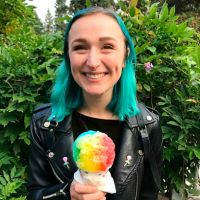 Is the game available to play on my mobile device?

Yes, the game is available on all iOS, Windows, and Android devices.

Can I play Gem Splash: Rainbows Gift for free?

What exactly is a Gem Splash?

If you land a Gem Drop symbol on top of a Gem Splash symbol, you can win a bonus prize of 100x your total stake.